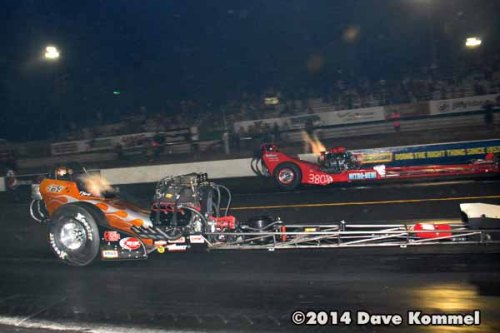 August 11, 2014, AA/FD HQ—Despite a series of determined efforts by his competitors to staunch this year’s proverbial bleeding, at the Pepsi Nightfire Nationals in Boise, Idaho front-engine Top Fuel Dragster driver Tony Bartone won his third straight NHRA Heritage Series event and continued his merciless assault on anybody standing between himself and the 2014 Points Title.

Before the clutch dust settled in Boise on Sunday night, there was no shortage of optimism and bravado amongst Bartone’s adversaries.

“We want him first round,” driver Jim Young said, before adding: “Go big or go home.” Young, who was a distant second in the 2014 Heritage Series Top Fuel points, qualified in the #1 position at Boise with a ¼-mile elapsed time of 5.80 seconds and saw this race as an opportunity to upend Bartone and salvage his season. Others echoed Young’s sentiments. “Tell anybody that will listen, we are going to win this thing,” declared Frank Ousley, engine consultant on Jim Murphy’s “WW2” entry, who was slotted 3rd in the points race. “We want this next one!!!” the head of the “Champion Speed Shop” team texted, moments before lining up against Bartone in the semi-final round.

All strong words. None of which mattered. Deaf to the dissent and the bluster, Bartone continued his undefeated streak, and has now won ten straight rounds of drag racing in 2014. At Boise, after qualifying second with a 5.83 at 261 mph, Bartone drove around Ron August (5.85 to 6.13), Adam Sorokin (5.90 to 6.12) and finally Young, (5.76 to 6.39). In each of these heats, Bartone lazily spotted his competition the lead at the hit, and then furiously gave chase while relying upon his Steve Boggs-provided horsepower to blast by the other racer and get to the finish line first. The last round against Young was the most demoralizing to the other racers. Bartone’s 5.76-second clocking stood for Low ET of the Nightfire Nationals, and his trap-speed of 267 mph earned him Top Speed of the Meet laurels.

Which is merely following form for the Long Island City, New York-based racer. Bartone has not only not lost in 2014, in each event he also set Low ET and Top Speed. In short, Tony is crushing it.

And now, with two events left this year, and with Young and Murphy’s Points Title hopes not only unlikely but a very distant mathematical possibility, the remaining drama in the Heritage Series comes to this: Will Tony Bartone go perfect for the season? -30—

(The next event in the NHRA Heritage Top Fuel Series is the New England Hot Rod Reunion, September 12-14 at Epping, New Hampshire.)

a mod explosion of dots and words View more posts