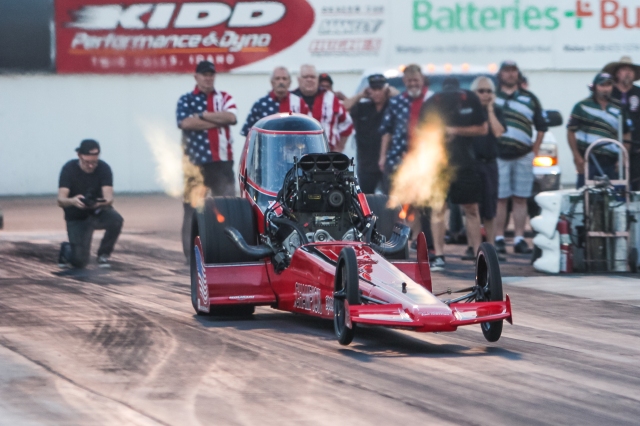 An action-packed weekend of nitro-burning mayhem was unexpectedly cut short when rain at Firebird Raceway upended the Pepsi Nightfire Nationals ahead of the AA/FD Final Round, leaving semi-final victors Jim Murphy and Adam Sorokin in nitro limbo. Murphy and Sorokin will strap into their front-engine dragsters and settle their contest of wills at the California Hot Rod Reunion and last race of the NHRA Hot Rod Heritage Series Top Fuel Championship at Famoso Raceway in Bakersfield, California on October 20-22.

The long race weekend celebrating Firebird Raceway’s 50th year began with some unanticipated AA/FD news as a surprisingly missing-in-action Tony Bartone left an odd number of Top Fuel drivers battling for front-engine nitro supremacy in Boise. Pre-race rumors left some wondering if Bartone was setting up a fake out, but only seven AA/Fuelers made the call for Friday’s Qualifying, confirming the absence of the 3-time Nightfire Nationals winner and reigning Top Fuel Champion. Still, four Chrysler Hemis and three Chevrolets entered Boise, with drivers ready to prove which combination would prevail. 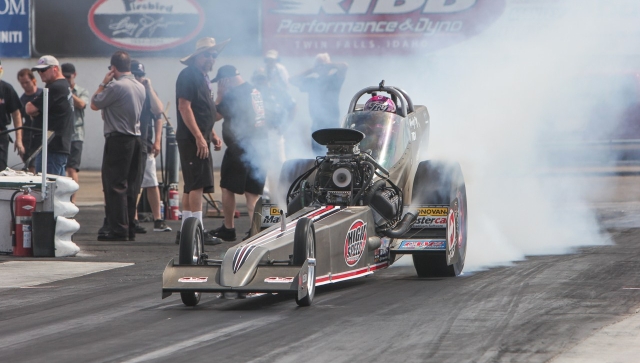 Near 100-degree daytime heat saw teams take different tuning approaches. Mendy Fry launched the Hemi-powered High Speed Motorsports dragster to a 5.78 ET in Session One. Later in the evening session, she clicked off early for event Low ET and number one qualifying spot with a 5.69 at 219 MPH. Concurrently, Jim Murphy drove the Roland Leong-tuned WW2 dragster out the back door oiled in and on fire into the number two slot. Fry witnessed the fiery drama unfold in front of her as Murphy passed lit up and smoking. Fortunately, both drivers emerged unscathed. Dusty Green gave the Nitro Hemi all it had in every round of qualifying for a number three position. 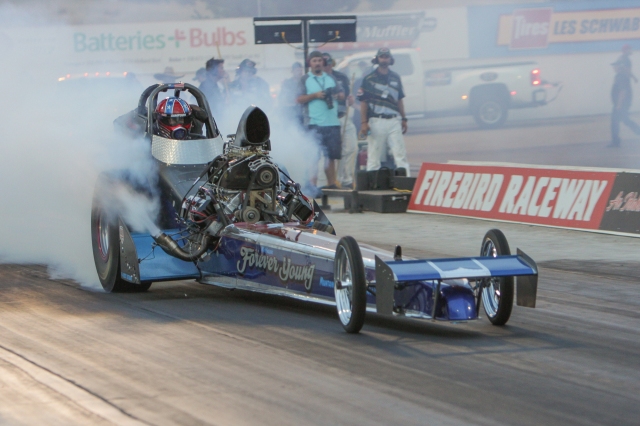 Bret Williamson not only drove the Mike Fuller Forever Young dragster to a number four AA/Fuel qualifying slot but also made number one qualifier and low ET behind the wheel of a fearsome Corvette Pro Mod. Adam Sorokin stepped up from a Session One mechanical mix up with a 6.01 ET at 214 MPH and number five qualifying spot in the Champion Speed Shop Chevy-powered canopy entry. Tyler Hilton ran the Great Expectations III through qualifying with some gear changes for a number six position, and Phil Ruskowski ran the small block Chevrolet powered Mighty Mouse into the number seven spot ahead of Saturday night Round One Eliminations under the lights.

TOP FUEL UNDER THE LIGHTS

With Low ET Mendy Fry ran a bye in Round One Eliminations. The High Speed Motorsports car got up on the tire and danced at half-track, but Mendy kept the rubber in the groove in the face of headwinds. Adam Sorokin deep staged the Champion Speed Shop dragster and took the win with a 5.89 ET at 217 MPH over Bret Williamson’s 6.17 ET at 199 MPH. Jim Murphy launched the Hemi-powered WW2 to a 5.75 ET at 252 MPH win after Phil Ruskowski red lit his small block Chevrolet powered Mighty Mouse dragster to a 7.42 ET at 171 MPH. Dusty Green ran his Nitro Hemi flames on to a 5.92 ET at 240 MPH over Tyler Hilton who gave chase in his big block Chevrolet powered Great Expectations III dragster with a 6.32 ET at 219 MPH.

The Chrysler vs. Chevrolet matchup continued as Sunday Semi-Final Top Fuel action saw Adam Sorokin and the small block Chevrolet prevail with a 5.92 ET at 192 MPH over Mendy Fry who red lit the High Speed Motorsports dragster and fouled out. Jim Murphy ran the WW2 to a 5.80 ET at 235 MPH over a hole shot and hard charging Dusty Green who gave the Nitro Hemi everything it had with a close 5.95 ET at 243 MPH, finishing just one tenth of a second behind Murphy. The Final Round stage was set for an epic Hemi vs. Chevy battle as crews thrashed through engine teardowns for a chance at victory.

The battle and win would have to wait. Drops of late afternoon rain for the first time in months gave way to downpour into the night. Hope was held out for a few hours, but after measured deliberation, the decision was made to postpone the race. Falling temperatures in concert with a soaked track and more rain forecast through morning put an anticlimactic end to four days of superior drag racing action. Murphy and Sorokin will settle their Nightfire Nationals Chizler vs. Chevy score at the California Hot Rod Reunion following the 4th session in the NHRA Hot Rod Heritage Series Top Fuel Championship at the Nitro Nationals September 22-23 at Tulsa Raceway Park. 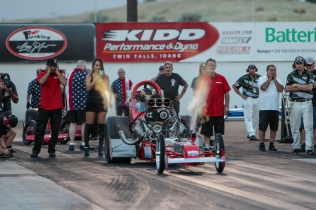 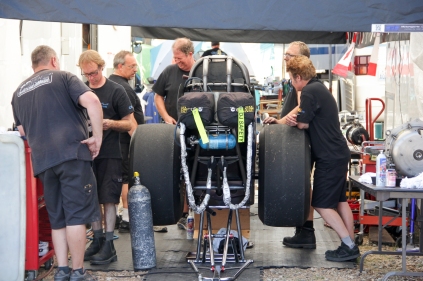 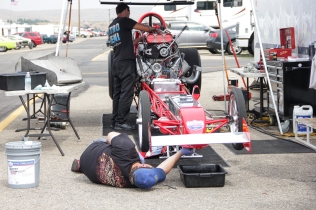 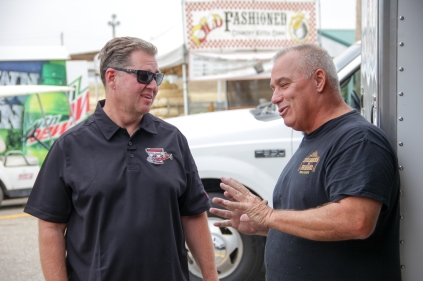 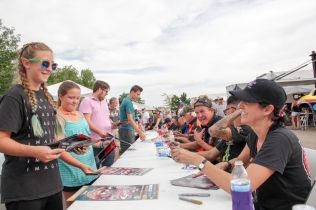 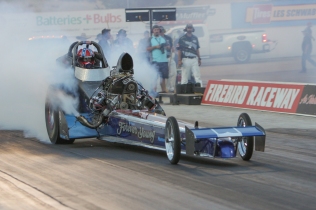 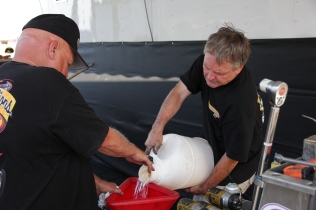