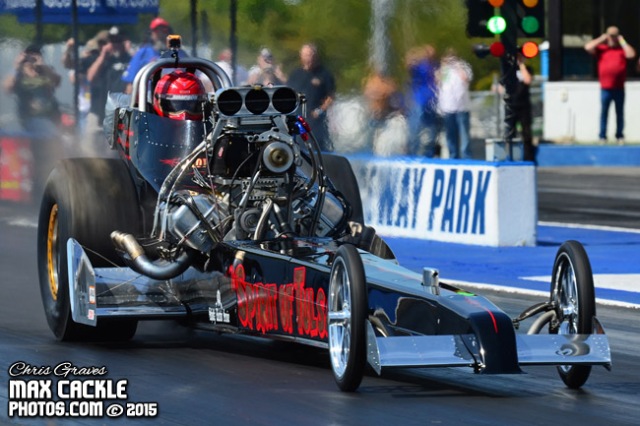 The All American Fuel Dragster coalition is bringing a full field of front-engine Top Fuel dragsters to the Nitro Nationals at Tulsa Raceway Park for their next to last battle in the 5-race NHRA Hot Rod Heritage Championship. This volatile nitro-fueled mix of qualifying and 8-car eliminations carries on a Tulsa Top Fuel dragster competition tradition set in motion at the NHRA World Finals from 1965 to 1968 and into the Seventies with the PRA National Challenge when the storied drag strip was known as Southwest Raceway.

Current Top Fuel points leader Jim Murphy and the WW2 Racing Team juggernaut are set to reprise nitro-burning action at Tulsa Raceway Park after unexpected rain at the Nightfire Nationals in Boise pushed the final round between Murphy and Adam Sorokin out to the California Hot Rod Reunion. Adam Sorokin feels the Champion Speed Shop small block Chevrolet combination is on track against the Roland Leong-tuned WW2 hemi and anyone else. “I was clicking it early all through the Boise race. We only scuffed two pistons. I think the car is going to really start running”.

Driver Mendy Fry will be living on Tulsa time from the number two points position in the High-Speed Motorsports hemi-powered Top Fuel contender and Dusty Green will meet the Nitro-Hemi in T-Town for a run at the stripe from the number four slot. Jim Young and the Young Guns are rolling their hemi-powered front engine AA/fueler towards the Oil Capital of the World from Wisconsin and Tyler Hilton is moving towards Tulsa Town after footing his big block Chevrolet-powered Great Expectations III AA/Fuel dragster to a 5.89 ET at 247 MPH against Paul Romine’s Funny Car at US 131 Motorsports Park in Michigan.

Local favorite Paul “Nobody” Schultz is in good spirits and suiting up to run the hemi-powered Spirit of Tulsa AA/Fuel dragster for a Nitro Nationals top spot. Tim Cullinan and his Nitro Nostalgia entry are on the way from Illinois, and the oldest speed shop in the southeast will be represented by Julius Hughes and his Atlanta Speed Shop AA/Fueler. Last minute entries into the fray are as yet unknown. Reigning Top Fuel Champion Tony Bartone is on the injured list with the California Hot Rod Reunion in Bakersfield in sight as a recovery plan.

As more nitro is good nitro the All American Fuel Dragsters will join front-engine blown alcohol and injected nitro A/Fuel dragsters, fuel-huffing supercharged nostalgia Funny Cars and front engine Junior Fuel dragsters along with a collection of nostalgia high-axle Gassers and pre-1972 doorslammers that may or may not have a tiger in the tank. But wait, there’s more! The Nitro Nationals will also feature a car show, live bands, and a pinup contest held in conjunction with racing action.

The 2017 Nitro Nationals runs Friday and Saturday, September 22nd and 23rd. Gates open Friday at 10 AM for racers and vendors. Spectator gates open at 5 PM. Racing commences at 6 PM. Gates open Saturday at 9 AM. Racing starts at 2 PM.

Top Fuel points standings heading into the Nitro Nationals at Tulsa Raceway Park and fourth event in the 5-race NHRA Hot Rod Heritage Series. Boise final round Top Fuel points to be settled at the California Hot Rod Reunion and last stop for the All American Fuel Dragster coalition this year at Famoso Raceway in Bakersfield, California October 20th-22nd. Head on over to http://www.nhrahotrodheritage.com for a schedule, racing news, points standings, tickets, race results, rules and more.

Have a Dragstrip Rumble for VIDEO coverage of AAFD racing action

The official website of the All American Fuel Dragsters