BAKERSFIELD, CALIFORNIA – Jim Young drove his Young Guns dragster to Top Fuel victory at the California Hot Rod Reunion after Jim Murphy damaged his WW2 AA/Fueler in the Semi-Final and did not return for the Final. Young advanced with methodical determination into a number 3 Qualifying spot, a 5.77 ET at 259 MPH Eliminations win over Rick McGee and Semi-Final win in a tight race against Mendy Fry with a 5.65 ET at 261 MPH blast that set event Top Speed.

Young’s run-it-to-the-stripe tuning strategy paid off for the Wisconsin-based team, who ran their AA/Fuel hemi throughout the weekend without extensive damage. Young plans to refine his winning formula over the Wisconsin winter with an eye on the mid-fives at the upcoming 2018 March Meet. “We’re right there. I know I could hit the 5.50s. We ran the same heads all weekend. Up until the Semi-Finals, we didn’t even have to take the motor apart. It can be done on a budget. Trust us!”

Veteran driver Jim Murphy was hoping for a Top Fuel Trifecta at the Hot Rod Reunion but the runner-up was all smiles after winning the rescheduled Boise Nightfire Nationals Final and taking the 2017 NHRA Hot Rod Heritage Series Top Fuel Championship. Murphy took the Nightfire Nationals win over Adam Sorokin and #1 Qualifier spot with a 5.65 ET at 249 MPH blast in the rescheduled race that ran during Session 3 Qualifying on Saturday. Murphy’s subsequent 5.74 ET at 226 MPH Eliminations win over Phil Ruskowski set up a second matchup with Sorokin for the Semi-Final.

Murphy drove out the back door in the Semi-Final with a blazing 5.60 ET at 246 MPH to Sorokin’s 5.72 ET at 241 MPH and clinched the Top Fuel Championship. Unfortunately, the WW2 hemi sacrificed a connecting rod in the process. Chutes out and oiled in, Murphy said he made contact with the wall in the shutdown area. The glancing hit damaged one front wheel, bent the steering, and crumpled a canard. Uncertain of hidden damage Murphy chose not to return for the Final for safety reasons.

Even with a Top Fuel victory at hand, Jim Young and crew worked feverishly in the pits to deliver the Young Guns dragster to its 5.50 ET at 260 MPH tune-up target. What would have been a single for Young turned into a combination Victory Lap and Exhibition Run as Adam Sorokin suited up and climbed into the Champion Speed Shop Special for a side-by-side Top Fuel closer at the 26th NHRA California Hot Rod Reunion. Young ran a 6.31 ET at 137 MPH for an uncontested event win. Sorokin unleashed small block Chevrolet but the tires could not contain full power. 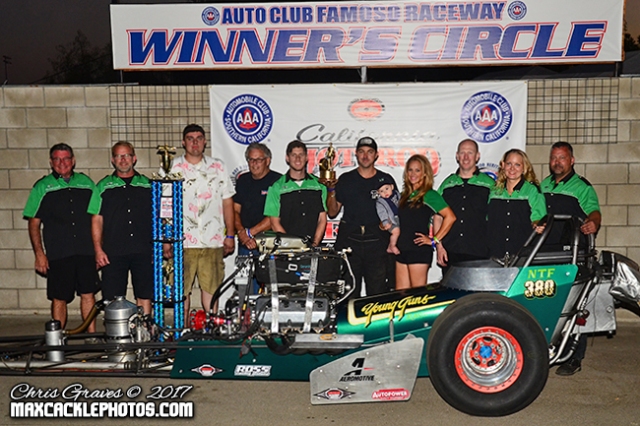 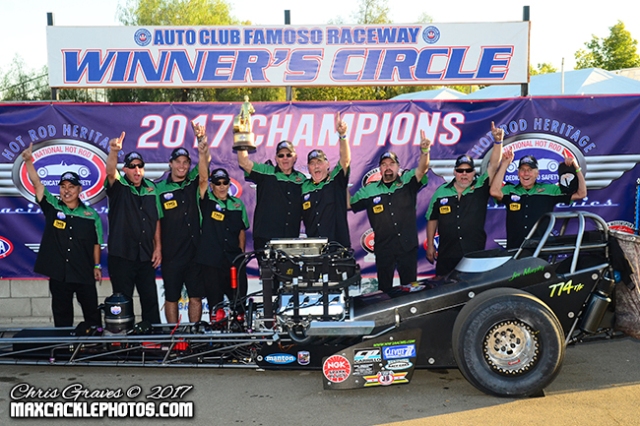