Driving through violent tire-shake, Mendy Fry took the 47th Pepsi Nightfire Nationals Top Fuel victory, Low ET and Top Speed with a 5.66 ET at 254 MPH blast in her “High Speed Motorsports” AA/Fuel dragster at Firebird Raceway in Boise, Idaho. “It was pretty bad — I didn’t think I was going to make it. The team gave me a great car, and I didn’t screw up,” said Mendy.

Runner-up Dusty Green pushed Steve Harwood’s “Nitro-Hemi” to a 6.04 ET at 198 MPH in the final after his holeshot-assisted 2nd-round battle with Pete Wittenberg was settled by few thousandths of a second margin of victory. “It was a great weekend for the Nitro-Hemi team. We had a good run against Pete and just didn’t have enough for the High Speed Motorsports team”, said Dusty.

As examples of the class’s camaraderie, Bowling Green runner-up Jim Young texted tuning advice to semi-finalists Wittenberg and vanquished foes from the “KMA Circuit Breaker” and Brendan Murry’s “Running Wild” teams gathered to help Dusty Green and the Nitro-Hemi crew prepare for the final round. “That is what this sport is about. Awesome people. I can’t thank them enough”, said Dusty.

Session One Qualifying kicked off Friday afternoon with nine AA/Fuel dragsters battling for nitro supremacy in 100-plus degree temperatures. Mendy Fry struck the tires on the 150-degree track Friday but motored to the top of the ladder Saturday afternoon with a 5.68 ET. Adam Sorokin landed the number two slot with a 5.85 ET in the Chevy-powered “Champion Speed Shop” entry. Dusty Green pushed the Nitro-Hemi to number three with a 5.97 ET at 243 MPH. Tyler Hilton stepped up with his family’s “Great Expectations III” to the number four position with a 6.07 ET, landing ahead of number five Bret Williamson’s and the “Forever Young” fueler’s 6.09 ET. Brendan Murry drove the Running Wild to number six with a 6.18 ET and Pete Wittenberg came back after breaking a drive belt in Session One to qualified seventh with a 6.22. Jim Murphy landed the “WW2” fueler in the number eight slot with a 6.58 and Canadian Phil Ruskowski was 1st Alternate following a herculean effort to get to the Nightfire Nationals after an engine explosion at a previous race.

TOP FUEL ELIMINATIONS UNDER THE LIGHTS

The Nightfire Nationals is famous for header flames under the lights and Saturday night’s Round One Eliminations saw Mendy Fry run a 5.67 ET at 253 MPH for the win over Jim Murphy’s 6.48 ET at 158 MPH. Pete Wittenberg turned on the KMA Circuit Breaker for a 5.73 ET at 253 MPH win on Adam Sorokin, who pushed the small block Chevrolet to 5.90 ET at 244 MPH. Dusty Green extracted a 5.98 ET at 248 MPH from the Nitro-Hemi ahead of Brendan Murry, who ran an 8.62 ET in the Running Wild. Tyler Hilton blasted the Great Expectations III to a 6.03 ET at 243 MPH over Brett Williamson’s 6.11 ET at 221 MPH, setting the stage for the Semi-Final battle on Sunday.

Semi-Final Top Fuel competition was tight and fierce. Pete Wittenberg ran a 5.71 ET at 252 MPH with a .145 reaction time and yet didn’t catch Dusty Green’s 5.80 ET at 241 MPH with an .054 reaction time. The margin of victory? 6/1000ths of a second and a few inches Inches at the stripe. Mendy Fry posted a 5.69 ET at 231 MPH to beat Tyler Hilton’s 5.88 ET at 249 MPH — the quickest and fastest run ever for the Great Expectations III big-block Chevrolet-powered AA/Fuel dragster. Tyler, his dad Robert, grandmother Alison Lee and crew divined the formula for success with a blend of timing and clutch fine-tuning and ran the weekend with minimal engine carnage.

The combined forces united at the Nitro-Hemi pit thrashed through an engine teardown for a shot at victory in a Hemi vs. Hemi Nightfire Nationals Top Fuel decider. At the green light, Dusty Green got out of the gate with .112 reaction time, but in the end it wasn’t enough against Mendy Fry who kept her foot down and muscled through tire shake for the win.

After striking the tires in Session One qualifying, Mendy Fry drove the High Speed Motorsports AA/Fuel dragster with remarkable consistency through qualifying and eliminations with 5.66, 5.67, 5.69 and 5.66 runs for event Low ET and 254 MPH Top Speed.

Mendy Fry’s victory at the 47th Pepsi Nightfire Nightfire Nationals at Firebird Raceway earned her the number one position in the NHRA Hot Rod Heritage Series Top Fuel Championship points battle heading into the fourth race of the five-race 2018 season at the Nitro Nationals at Tulsa Raceway Park September 21st and 22nd.

All photos Arlene Eliason and AAFD. 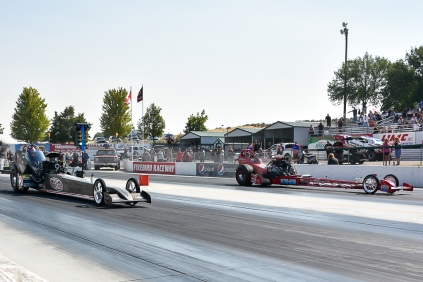 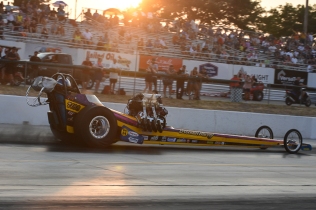 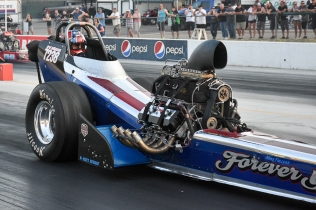 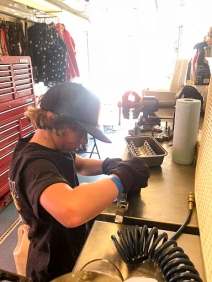 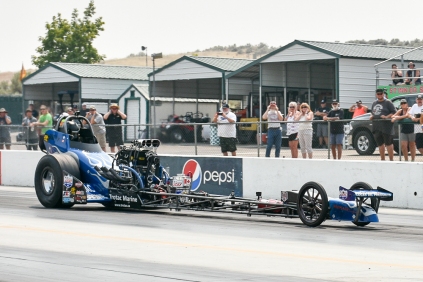 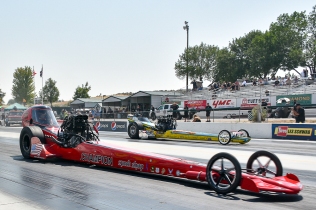 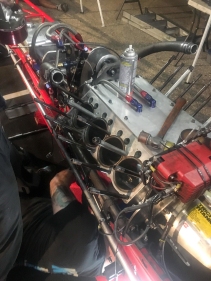